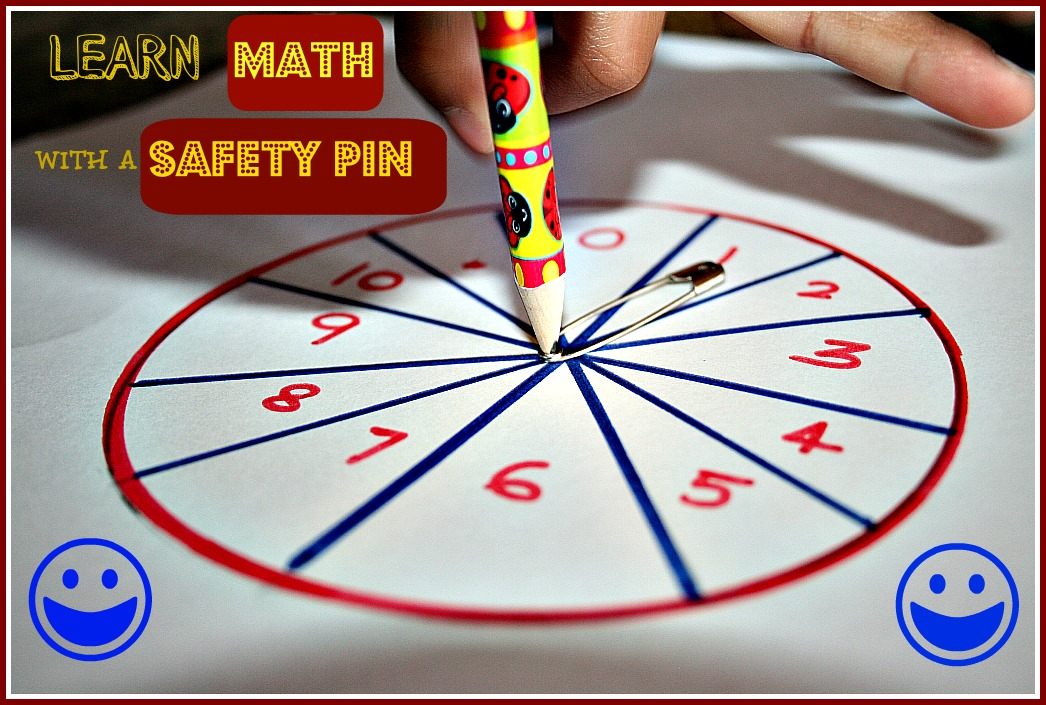 Learn Math With A Safety Pin

With just a safety pin or a cardboard arrow and a number wheel, we pulled a “Wheel of Fortune” while learning math. The safety pin and pencil trick was something I always did as kid. The game was ever so popular in our school – just flick the pin and keep scores.

Today we turned that fun activity in to something fun and educational. It is weird to say that because the time I grew up, those two words (fun and learning) DID NOT go together. We are all here to change that, aren’t we all? Yeah! Let’s hear it for some play based learning!

I made a number wheel using an empty yogurt container. Big A traced the circle and used her ruler to draw the lines. It was GREAT practice for her to use her “study tools” You could use a safety pin or a simple arrow made out of cardboard. We used both.

Place the safety pin/arrow in the middle of the circle and place the pencil inside the hole on the pin to just hold it.

That’s it have the kid flick the pin.

Kid reads out the number the pin lands on.

We did it first for number recognition I drew a 11 to 20 number wheel and Big A was too eager to keep flicking the pin and [highlight bg=”#DDFF99″ color=”#000000″]recognizing her numbers.[/highlight] Just plain and simple activity, this will give you about 15 minutes worth of playtime and learning.

The following day we amped it up a notch and did the activity on a larger poster board. I turned it into a game.

We made two similar circles and filled them up with numbers from 1 –10. We are going to do some addition.

I had recently bought a jar of these adorable glass gems (vase filler) from my wallet’s No.1 enemy – TARGET! However this time it was totally  a premeditated plan to lure BIG A into the play based math game. The reason I had to actually lure Big A is because the kid does not like to do the same activity (actually even remotely similar activities) twice.

So this time I gave her something any 4 year old girl would love to have – shiny sparkly thingies- Gems.. score! Anyway, she absolutely loved the stones and we did so much math that day that I was the one to stop the “game”. Here is what we did.

Draw two circles on either sides of the poster paper and create a number wheel. We did a 1-10 number wheel since we were doing some addition.

Divide the poster into two sections –one for each player We are ready for at least 3 rounds of the game

Once Big A, flicked her pin/arrow, she reads out her number aloud and takes the corresponding number of gems from the pile and places them on her side of the chart.[highlight bg=”#DDFF99″ color=”#000000″] Great for counting! [/highlight]

Then mom plays her turned and does the same while secretly wishing that she gets a number much lower than Big A’s. Yeah I know, she has to learn to not be a sore loser etc. But one lesson at a time.

When it was my turn, I tried to arranged my gems in a pattern. Big A quickly noticed that and started repeating the pattern out loud. Great for pattern recognition.

Once round 1 was done, Big A counted both her gems and mom’s gems and concluded that she won this round because she had more gems We did 2 more rounds of flicking and at the end the end it was time to total all the gems.

We concluded that Big A won the game because she had more gems.

Every time she concluded she had more gems than mom, we located the numbers on the number line and always noted that the higher number comes after the lower.[/highlight]

It was a fun activity for her and since it is so versatile, I’m sure you can adapt it according to the grade level of the kid.

Once some serious learning was done, they had to do some silly play. Since the baby woke up, they spread the gems around and started swimming in a “gemmy lake”